A few weeks ago I blogged about my LVL Lashes – a lash lift treatment.

Two weeks later, how am I liking them?  Well I can honestly say….I LOVE them and don’t know why I didn’t do it sooner.  Here’s a photo after 7 and 14 days for you to see how well the treatment has lasted so far.

After 2 weeks my mascara is still redundant and I’m totally impressed with my lovely lashes.  Without a doubt,  I would recommend LVL Lashes to anyone who doesn’t want to put mascara on every day, curling their lashes and wants to bright and awake without all the fuss of make-up.  This would make a great treatment before going on holiday too!

I will keep this treatment going for sure!

I have the straightest eyelashes ever!  I don’t wear a lot of make-up but I always try to make sure I curl my lashes and apply a mascara.  It make such a difference to the appearance of my face making me eyes look bright and awake.  It was a few months ago I heard about a new treatment called LVL (length, volume and lift) which was created and developed by Karen Betts.  I watched a few YouTube videos but the one I liked the most, showing you the step by step process was by Lisa Eldridge which you can watch here.

In the past I’ve only ever tinted my eyelashes which made such a difference but the thought of having them curled and tinted got me very excited!  The treatment takes around 45 mins promising to lift and straighten your lashes from the roots and the best thing of all, it lasts 6-8 weeks.  This all depends on how well you take care of your lashes after the treatment.  The main thing I like about LVL is that it’s low-maintenance yet long-lasting.  The treatment doesn’t take long to do and the results are instant.

I’m based in Edinburgh and although I’m sure there’s a few salons who offer the treatment I got my done in Odyssey Boutique on William Street.  You can find your nearest salon here.  I was offered 3 different sizes but advised to go for medium as it would offer the most natural look.  I decided to buy the serum which you’re recommended to use and should apply twice a day.

In the next few weeks I’ll post photos of my eyelashes so you can see the results but in the meantime here’s my before and after shot.

I’ve noticed a few people on my Facebook posting photos with the hashtag #100happydays.  After finding out a little more about it today here’s how it works…..

“Every day submit a picture of what made you happy!  It can be anything from a meet-up with a friend to a very tasty cake in the nearby coffee place, from a feeling of being at home after a hard day to a favor you did to a stranger.”

To get started all you have to do is visit 100 Happy Days to register.  Fill in your details, set a start date to begin the challenge and choose your favorite social media platform to post your happy photos – Facebook, Twitter, Email, Instagram or Tumblr.  Simples!

I’m sharing my 100 Happy Days on Instagram, so feel free to have a little look at what makes happy!

I hadn’t been feeling well for a few weeks but my cousin insisted I went out with her to a charity night, so off we went unaware that I was going to meet my future husband.  Towards the end of the night my eyes were drawn to a ‘tall dark handsome’ guy, he almost pulled off perfect until I noticed he was wearing a hoodie 😉 I recognised his face but not sure where from so I just said hi to him.

We then decided to head out to a nightclub for some dancing to end a good night.  When we arrived I noticed standing in the queue was the ‘tall dark handsome’ guy from the charity night.  This time he wearing a smart shirt – much better I thought.  He came up to me and said ‘I will stand with you because I don’t have any ID with me.’  Suddenly, I was beginning to feel a lot better.

We spent some time together in the nightclub chatting and dancing and then a group of us decided to head to a friend’s house for a party.  Later that night he told me I was going to be the one he’d marry.

Two years had gone by and we were out celebrating a close family friends 70th birthday.  I could hear my Dad, Uncle and Matt in the background wondering what was all the fuss about.  The next thing I knew Matt was on the stage, down on one knee!  I couldn’t even tell you what he said, I was just in so much shock!

The day after Matt proposed he took me out shopping and let me pick my ring. Which I thought was amazing.

We are getting married on the 21st June 2014 and I could not be more excited. 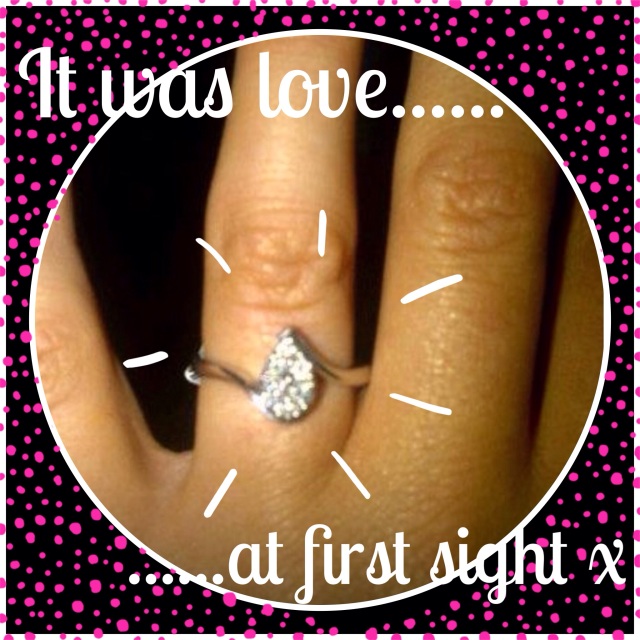